Don’t mistake this cream pie as a variation of lemon meringue pie—it has an altogether different look and taste, and is truly elegant and pretty. The filling is a super-creamy lemon curd, with a soft and subtle lemon pucker to it, and the whipped cream highlights the richness and simplicity.

1. On a lightly floured work surface, roll out the pastry to a circle just under ¼-inch thick. Line an ungreased fluted removable-bottom tart pan, dusted with flour, pressing into the edges well and trimming away any excess dough. Chill the pastry for 30 minutes.

2. Preheat the oven to 400 F (200 C). Place the chilled pastry shell on a parchment-lined baking tray. Pierce the bottom of the crust with a fork to prevent air pockets from forming. Place a piece of foil completely over the crust and fill the shell with raw rice or beans (or pie weights). Bake the crust for 10 minutes, then remove the foil with the weights and bake 10 minutes more. The crust will only brown at the edges, less than a traditional pie crust. Allow the crust to cool while preparing the filling.

3. Reduce the oven temperature to 350 F (180 C). Melt the butter in a sauté pan over medium heat and add the leeks, sautéing until tender, about 10 minutes. Sprinkle the leeks over the bottom of the cooled crust and top this with the grated Gruyere.

4. Whisk the eggs lightly, then whisk in the two creams, nutmeg, salt & pepper (add just a pinch of salt, since most of the seasoning comes from cheese). Pour this slowly into the crust, allowing the filling to seep in between the leeks and cheese. Bake the quiche for 40 to 45 minutes, until it no longer jiggles when gently moved. Allow the quiche to cool for 15 minutes before slicing to serve.

Alternatively, the quiche can be baked a day ahead and chilled, then warmed in a 300 F (140 C) oven for 30 minutes before serving.

Classic Pie Dough
This is my staple pie dough recipe for fruit pies, cream pies, savoury pies . . . pretty much any recipe that calls for a flaky, buttery pastry shell. Use the full recipe if you’re making a double-crust pie, or just half if you want either a pie shell or a top but not both.

1. Combine the flour, sugar and salt in a large bowl. Add the oil. Using a pastry cutter, electric beaters or a mixer fitted with the paddle attachment, blend until the flour looks evenly crumbly in texture.

2. Add the butter and cut in until the dough is rough and crumbly but small pieces of butter are still visible.

3. Place the water and vinegar (or lemon juice) in a small bowl, stir together and then add all at once to the flour mixture, mixing just until the dough comes together. Shape it into two discs, wrap well and chill until firm, at least 1 hour.

4. If you are not making a pie immediately, refrigerate the dough, well wrapped, for up to 2 days, or freeze it for up to 3 months. Thaw it overnight in the fridge before rolling.

Note:
The idea that butter is more difficult to work with than shortening is a myth. However, I have found that working with cool—but not ice-cold—butter is easiest. Pull your butter from the fridge about 30 minutes before making your dough and it will cut into the flour quickly and more evenly.

Adding a little vegetable oil to the flour before adding the butter is another secret for tender and flaky pie dough. The oil coats the flour so that it won’t overhydrate when the water is added. Too much water develops the protein in the flour, which is why a crust becomes tough or shrinks when it bakes. 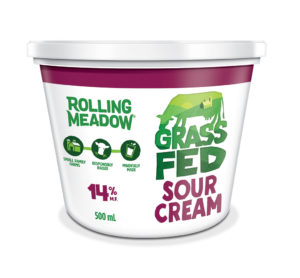 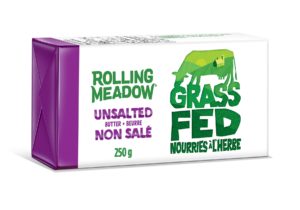 on the purchase of any

Rolling Meadow 10% Half and Half Cream